Letter From the bcalm inventor

Dear Sir/Ma’am You don’t know me. I am a 69 year old psychiatrist with a burning passion for helping those with anxiety. I enjoyed your news commentary on anxiety. More attention needs to be paid to this. People trivialize anxiety.  For example, most people would guess, without any hesitation, that the leading cause of suicide […]

There is a range of treatment and modalities available to panic attack sufferers. The right treatment for you depends on the severity and frequency of your panic episodes. Your GP will be able to advise on what might work best, but you may also wish to consider more natural remedies in conjunction with any medication […]

Young women are at high risk of untriggered panic attacks Everyone who suffers from panic attacks has a panic trigger, and these can vary greatly by age, gender and even location.  For example, men are almost 20% more likely than women to be triggered by being in a crowded room. 40% of men listed this […]

UK’s panic attacks happening in crowded rooms, at night before bed, flights and driving in the car [2017 data]

Crowded rooms are the most likely situations to bring on a panic attack, followed by sleep and taking a flight, according to a new study involving 1,000 adults. The research, led by Geoffrey Wolf, co-founder of bcalm, also revealed: Women are three times more likely to have a panic attack in the elevator compared to […]

Curse of 2016 – These celebrities are still alive, but they made us panic for a second.’

90% of social media users say they experience a “moment of panic” when they see a celebrity trending, according to new research conducted on behalf of bcalm. Of those who’d experienced a Twitter trend-induced moment of panic, 8 out of 10 (79%) say the number of high profile celebrity deaths in 2016 have made them […] 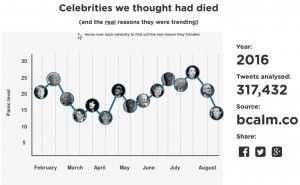 45% of Britons say they’re experiencing increased levels of anxiety in the aftermath of the EU referendum, according to a new study* co-ordinated by anxiety and panic attack specialists Dr. Stephen Cox and Dr. Michael Sinclair, on behalf of bcalm. General uncertainty about the UK’s future (33% said this was their main source of anxiety) […]

These top celebrities are helping the UK’s panic sufferers

Stephen Fry and YouTube’s Zoella are the most well-known celebrity panic attack sufferers, according to a new study, and 53% of people find their honesty helpful when dealing with their own panic disorders. The study, conducted by bcalm, polled 3,000 adults from all over the UK on their experiences with panic attacks, and found that […]

Swansea is the UK’s panic attack hotspot – with almost 20,000 of the city’s residents suffering at least one panic attack every week